I have such fond memories of the tiny Baptist Church of my youth.  The people were so warm and loving. They made sure a God-hungry kid like me was fed plenty of spiritual meals, going out of their way to ensure I was at Sunday School, Bible Camp and every special Church function.

One such function was our recurring invitation of what I called Chart Evangelists to our little Church on Jebavy Drive.  It was a big event when one would show up for a week, preaching loud and dramatically every night with his wall-to-wall colored charts detailing out the end times.  I confess I was enthralled with the maps of end-time events more than the preaching.

They always used the same charts, created by a draftsman who became a Baptist dispensational preacher in the late 1800s.  Clarence Larkin was his name and his attention to detail in laying out apocalyptic chronologies was and is unparalleled.  It takes a brilliant mind to collect all those seemingly untamable images and lay them out in some sort of intelligible order, no matter whether the underlying theology was spot on or not.

That explains why I showed up every night on those weeks in the late 70's when those flamboyant preachers came to town.  For a kid who loved working puzzles, building model rockets and soldering electronic kits I found the end-time charts irresistible, for they claimed to be the key to understanding future events from a Biblical perspective before they unfolded.  They helped me work the puzzle of mankind's future in my mind and set me at ease that God was indeed in control and had a plan, albeit somewhat bizarre, for humanity's future.  For me it was almost as good as I imagined it would be if I had my own Light Saber, X-wing Fighter, Elven Ring of Power (like Gandalf) or better yet, a Palantir (i.e. a Middle Earth Seeing Stone)!

Now, forty years later I am drawn back to those memories with an added layer of meaning.

Over the years I learned that Apocalypse is the English transliteration of a Greek word and means "unveiling" or "revealed" thus the alternate title of the last book of the New Testament "The Revelation of Jesus Christ".  My early formation in the faith taught me that this "Revelation" of Jesus was to happen at the end of the ages... that the whole world would see Him revealed as King of the universe.

Now however, I have found there is another way to understand this revealing of Jesus spoken of in the last book of the Bible.  In fact, because of this new and deeper way, my entire view of the cosmos has changed from what I held as a kid in the late 70's.  I mean, I used to wish so intensely that the Star Wars and Lord of the Rings stories were really true.  Now I believe with the entire fiber of my being that something even more mind blowing is true on our planet on a daily basis.  I thought I was hungry for my favorite sci-fi and fantasy stories to come to life, but that was just scratching the surface of my longings.

From the time I was a kid, my hunger for God never grew less as I grew older.  It increased.  I couldn't figure out how to feed that deepening hunger for God within the venues where I was seeking Him, so I turned to other less nourishing things to abate my hunger.  Yet like Gollum, the more I partook of those things, the more famished my soul became.  Misdirected hunger could have actually killed me as it has so many others, but God's mercy prevailed until I was ready to hear and embrace the truth.

This came about in 2008 when I heard and finally comprehended that there was a form of the Christian Faith that believed God literally offered Himself to us as food and drink.  Every day.

Literally.  Spiritually.  Mystically.  Physically.
[I no longer see these terms as contradictory.]

I found THAT in The Lamb's Supper.  In the eastern hemisphere it is usually called "The Divine Liturgy".  Here in the west it is called simply "The Mass".  It is here that Jesus, hidden in the form of bread and wine is unveiled to the faithful in a tiny way each day. 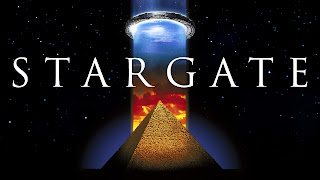 Believe me when I tell you, that was a lot to unpack for a guy who grew up Baptist and married into the Reformed tradition.   I was not taught to look kindly on the Catholic Church nor anything that smacked of High Church Tradition.

Yet my cosmology shifted nonetheless, for  something greater than Star Wars is here.  Every day Jesus is revealed at divinely appointed celestial portals (Yes, Star Gate is another of my favorite stories) and makes an inconceivably humbling appearance as food and drink to be consumed by the faithful.  [Isn't it interesting that Sci-fi and fantasy genres so often point to something beyond our comprehension.]

Well, for me this is the only reality worth pondering over and over.  This is why I go to Mass every day I am able.  Jesus is there and pours Himself out literally as food and drink and I gobble Him up.  God becomes (in a mind blowing quantum physics sort of way) an actual part of me and every believer who partakes in this time bending "once for all" meal.

Now my conversion to this way of thinking may be interesting (probably to me only) but I cannot help revisiting the stories of others who have come to see things in this cosmology shifting fashion.  That is why nearly every year I reread or at least re-listen to Dr. Scott Hahn's story. 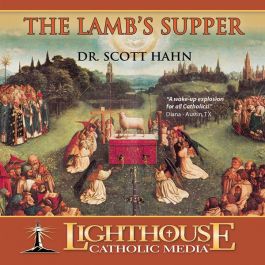 He was a protestant pastor researching how to teach his congregation about prophecy, especially the book of Revelation, when he stumbled into Mass one day on a hunch that it might "reveal" some of the mysteries of the material.  His hunch turned out to be spot on, for the ancient Christian liturgies are chock full of quotes and scenes straight from the Apocalypse.

His story can be found in a book (audible, kindle, softcover) called "The Lamb's Supper: The Mass as Heaven on Earth".  It is relatively short, only a four hour listen.  Every time I revisit it, I am comforted to know that Jesus appears to us daily, if we have eyes to see Him and indeed mouths to consume Him.

I'm now taught that there are at least three 'comings' of Christ.  The first appearance hidden in Palestine 2000 years ago.  A final coming in the future when He returns as King openly to the whole world.  But also (between that first and final appearance), billions of hidden middle comings in the bread and wine every day, all over the world.

It is a decidedly covert operation, at least for now. Only those given the eyes to see it ever catch a glimpse of it in this life. I have never seen the hosts of angels and all the saints at any given Mass or Eastern Church Divine Liturgy. I have been in Churches that inspire me to see such things with the eyes of my heart however. Usually these are buildings with beautiful stained glass or iconography of Angels and Saints applied with due proportion and harmony.

Once in a while however, someone produces media that gives a leg up to those who struggle to imagine what is really going on in Mass, just beyond the veil of our limited vision. Such is this video produced in 2019. It can prime that pump and lift the veil just for a moment, making seen the unseen for us. It is just a tiny peek into the reality of Jesus speaking in Persona Cristi through the priest, of the heavenly hosts celebrating with us, of that strange compression of time that allows us to participate in the actual last supper of Jesus and His disciples... all of that... just a sneak preview in a bit more than 5 minutes of actual film.

If it helps one person open the eyes of their hearts, it will be more than worth posting it again here:

Remember, all produce on the farm is freely given
and never for sale. All donations to the farm
are tax deductible as we are a registered 501(c)(3).
If you've been blessed by our produce and would
love to make sure others get blessed too,
use the 'Donate' button below to pay it forward.
Posted by Farmer Fred at June 21, 2022