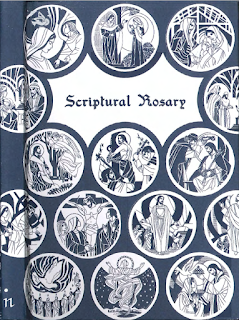 The following is quoted from the booklet entitled "A Scriptural Rosary".  My first serious introduction to the Rosary, it was found on a little private retreat in the bookstore of the Dominican Center in Grand Rapids, MI.  The concise historical background section is very readable and informative.  May it bless you as well.
__________________

The story of how the Rosary of the Blessed Virgin Mary originated, and how it has developed and changed over the centuries, is one of the most interesting but little known chapters of the history of our Faith.  A brief look at this curious story will show that the Scriptural Rosary presented here is actually very similar to the form of the Rosary that was once in universal use during the late Middle Ages.

An Outgrowth of the 150 Psalms of David

Most historians trace the origin of the Rosary as we know it today back to the so-called Dark Ages of ninth century Ireland.  In those days, as is still true today, the 150 Psalms of David were one of the most important forms of monastic prayer.  Monks recited or chanted the Psalms day-after-day as a major source of inspiration.

The lay people who lived near the monasteries could see the beauty of this devotion but because very few people outside the monasteries knew how to read in those days, and because the 150 Psalms are too long to memorize, the lay people were unable to adapt this prayer form for their own use.

So one day in about the year 800 A.D., one of the Irish monks suggested to the neighboring lay people that they might like to pray a series of 150 Our Fathers in place of the 150 Psalms.  Little did he know that  his simple suggestion was the first step in the development of what would one day become the most popular non-liturgical prayer form of Christianity.

At first, in order to count their 150 Our Fathers, people carried around leather pouches which held 150 pebbles.  Soon they advanced to ropes with 150 or 50 knots; and eventually they began  to use strings with 50 pieces of wood.

Shortly afterwards the clergy and lay people in other parts of Europe began to recite, as a repetitive prayer, the Angelic Salutation, which makes up most of the first part of our Hail Mary.  St. Peter Damian, who died in 1072, was the first to mention this prayer form.  Soon many people were praying the fifty Angelic Salutations while others favored the fifty Our Fathers.

Origin of the Mysteries

Then during the thirteenth century another prayer form, which would soon give the Rosary its Mysteries, began to develop.  Many medieval theologians had long considered the 150 Psalms to be veiled prophecies about the life, death, and resurrection of Jesus.  By deep meditation and skillful interpretation of the Psalms certain of these men began to compose Psalters of Our Lord and Savior Jesus Christ.  These were series of 150 praises in honor of Jesus, based upon interpretations of the 150 Psalms.

Soon Psalters devoted to 150 praises of Mary were also composed.  When a Psalter of Marian praises numbered 50 instead of 150 it was commonly called a rosarium, or bouquet.

Thus, during the thirteenth century there were four distinct Psalters in use at the same time: the 150 Our Fathers, the 150 Angelic Salutations, the 150 praises of Jesus, and the 150 Praises of Mary.  In an age when unity was held in such high regard, perhaps it was inevitable that these four prayer forms should eventually be combined.

The Carthusians Combine Prayers and Mysteries

The first step toward the combination of these four kinds of psalters came in about 1365 A.D. when Henry of Kalkar, the Visitator of the Carthusian Order, grouped the 150 Angelic Salutations into decades and put an Our Father before each decade.  This combined the Our Father and the Hail Mary for the first time.

Next, in about 1409, another Carthusian, Dominic the Prussian, wrote a book which attached a Psalter of fifty thoughts about the lives of Jesus and Mary to a Rosary of 50 Hail Marys.  This was the first time that a special thought was ever provided for each Hail Mary bead.  Eventually the 50 Hail Mary thoughts of Dominic the Prussian were divided, as Henry of Kalkar had done, into groups of ten with an Our Father in between.  Many variations of this form were composed between about 1425 and 1470, but the changes were gradual, not sudden.

By 1470, when the Dominican Alan of Rupe founded the first Rosary Confraternity, and thereby launched the Dominican Order as the foremost missionaries of the Rosary, he could refer to the Rosary with a special thought for each Hail Mary bead (which was the form he favored) as the new Rosary, while he referred to the form with the Hail Marys and no accompanying statements as the old Rosary.

Through the efforts of Alan of Rupe and the early Dominicans this prayer form (150 Hail Marys with a special thought for each bead) spread rapidly throughout Western Christendom.

It is important to note that this form of Rosary (the form which Alan of Rupe promoted so successfully as the Rosary of St. Dominic) is the model upon which the new Scriptural Rosary is based, that is, a Rosary with a special thought for each of the Hail Mary beads.

But the fifteenth century was a time of change and this successful medieval Rosary form was gradually abandoned as the Christian world moved out of the Middle Ages and into the Renaissance.

Picture Rosaries Introduce the Short Rosary We Use Today

The abandonment of the medieval Rosary form, the form which provided a special thought for each Hail Mary bead, came about in this manner: In about 1500 it became possible to reproduce woodcut picture prints inexpensively for the first time.  Since the vast majority of people still could not read, these picture Rosaries became immediately popular.  But since it was difficult and expensive to draw and print 150 different pictures, one for each Hail Mary thought in the medieval Rosary, the new picture Rosaries usually showed only fifteen pictures or one for each Our Father bead.  At first the ten Hail Mary thoughts were printed around each Our Father picture.  Perhaps the most beautiful picture Rosary of this sort was the one first published in Venice by Alberto da Castello, O.P., in 1521.  But during the 16th and 17th centuries the use of the special Hail Mary thoughts gradually died out, and there remained only the fifteen brief Our Father thoughts which have survived as the fifteen mysteries we know today.

(As an interesting historical footnote, the only place in the world where the old medieval Rosary with 150 Hail Mary thoughts is known to survive today is in the isolated little mountain village of  Schrocken, high in the Vorarlberg Alps of Austria.  Here the villagers still come together as they have since the Middle Ages to pray the Rosary the way it was once prayed throughout the Christian world.)

As soon as the short Rosary of fifteen Mysteries and no Hail Mary thoughts had replaced the medieval form, people recognized the need to augment the fifteen brief Mystery statements.  Supplementary prayers usually took the form of narratives or meditations to be read before praying each decade.  One of the most popular of these sets of fifteen meditations was written by St. Louis de Montfort in about 1700.  Most of the currently popular novena meditations follow this format, that is, an introductory paragraph of devotional thoughts to be read before praying each decade.

First Stirrings of a Return to the Medieval Rosary Form

Then beginning in the early 20th century, there appeared the first signs of a return to the medieval method.  Provost Walter of Innichen published a series of thoughts for each Hail Mary in German.  In 1920 Father Kilian Baumer composed another series of Hail Mary meditations which were published in Fribourg, Switzerland.  The most recent printed work with special thoughts for each Hail Mary is that of Dr. Magnus Seng, a Canadian surgeon, published in 1946.

Each of these recent writers composed  pertinent statements, or thoughts, to be read before or after praying each Hail Mary of the Rosary.

The Scriptural Rosary presented here differs from these recent compositions, as it differs from the medieval version, in that it is composed almost entirely of direct quotations from the scriptures.  These quotations are blended to tell the story of each Mystery in ten consecutive thoughts.
Remember, all produce on the farm is freely given
and never for sale. All donations to the farm
are tax deductible as we are a registered 501(c)(3).
If you've been blessed by our produce and would
love to make sure others get blessed too,
use the 'Donate' button below to pay it forward.