The Upside Down, A World Passing Away 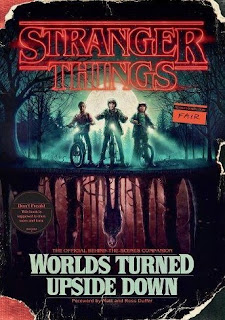 Not long ago I took the plunge into one of the most popular Netflix series and not unlike others fell instantly in love with the adorable kids that are actually the lead characters of the series.  Add to that a plot and elements that are, to me at least, quintessentially intriguing and you have binge material.

In this story, the upside down world of monsters and mayhem starts breaking into the right-side up world that we live in.  It is simply terrifying to think about and would be more so if not for the adorable cast.

Here is the thing.  I believe the tale opens up for us the reality we are living in right now.  With one major catch.

The creators of Stranger Things have it all upside down.

The way I see it and the way most of the great teachers of the Christian Way (including it's founder) have presented our current situation is that we are currently living in the upside down.  Christ came to pull us into the right-side up.

Makes sense of the current situation of monsters and mayhem, yes?

Bishop Barron touched on it today in his Gospel homily on the beatitudes, that strange, seemingly upside down set of statements by our Lord Jesus.

Friends, in today’s Gospel Jesus goes up a mountain and sits down to teach. In the Old Testament, we find Moses, the great teacher, also going up a mountain to receive the Law, and then sitting down to teach it. However, Jesus is not receiving a law; he is giving one.

Theologian N.T. Wright has pointed out that the Old Testament is essentially an unfinished symphony. It is the articulation of a hope but without a realization of that hope. Thus, as the fulfillment of Israel’s entire story, Jesus begins his primary teaching with the Beatitudes, a title that stems from the Latin noun beātitūdō, meaning "happy" or "blessed." 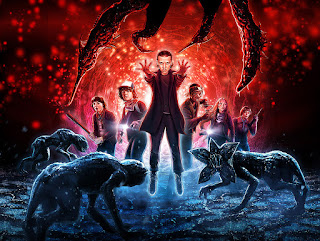 Through this series of paradoxes, surprises, and reversals, Jesus begins setting a topsy-turvy universe aright. How should we understand them? A key is the Greek word makarios, rendered "blessed" or "happy" or perhaps even "lucky," which is used to start each of the Beatitudes.

And so, "Blessed are the poor in spirit." We might say, "How lucky you are if you are not addicted to material things." Here Jesus is telling us how to realize our deepest desire, which is the desire for God and not for passing things that only bring temporary comfort.

So how do we get into the right-side up other than just being lucky or blessed?

Fr. Jim (Priest at St. Thomas the Apostle here in Grand Rapids) commented in his homily today that many would try to take these words of Jesus and see them as a new set of prescriptions or commandments to set in front of us daily and commit to following them.  He made it quite clear that this is a mistaken notion.

Rather, these beatitudes are the fruits of being connected with Jesus.  In fact that is the "new law of Loving connection" that Jesus was teaching us.  If I am connected with Jesus, then even though I live in an upside down world, I will more and more be turned right-side up, for Christ our God is right-side up and he starts breathing His Spirit of Love into us and through us. 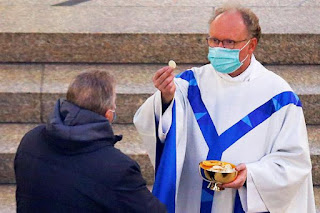 As I was watching the St. Thomas mass this morning with all the people wearing their masks because of the pandemic, it was a striking image to see those distributing the Precious Body of Christ wearing a mask like a surgeon - passing to us needy souls the medicine of immortality.  The medicine that draws us into the right-side up literally and spiritually, connecting us into the eternal right-side up Kingdom of God the Father.

I find great hope and comfort from this.  The Kingdom of God is breaking into the world both in the future AND now.  For now it is the eternal breaking into the temporal in a most subtle manner.  It is quite a covert operation and it is unstoppable.

Remember, all produce on the farm is freely given
and never for sale. All donations to the farm
are tax deductible as we are a registered 501(c)(3).
If you've been blessed by our produce and would
love to make sure others get blessed too,
use the 'Donate' button below to pay it forward.
Posted by Farmer Fred at June 08, 2020

My sorrow was turned to hope this morning.  I am grateful for that.  First the sorrow…

Sadness of late has flooded my soul as I’ve watched events unfold.  It triggered the classic Bob Dylan lyric “who gonna take away his license to kill?” in my heart, and really, can anyone say it better?  Seriously, just read and listen to these lyrics.  Poetic genius!! 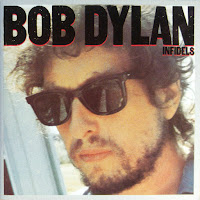 Man thinks 'cause he rules the earth he can do with it as he please
And if things don't change soon, he will
Oh, man has invented his doom
First step was touching the moon

Now, there's a woman on my block
She just sit there as the night grows still
She say who gonna take away his license to kill?

Now, they take him and they teach him and they groom him for life
And they set him on a path where he's bound to get ill
Then they bury him with stars
Sell his body like they do used cars

Now, there's a woman on my block,
She just sit there facin' the hill
She say who gonna take away his license to kill?

Now, he's hell-bent for destruction, he's afraid and confused
And his brain has been mismanaged with great skill
All he believes are his eyes
And his eyes, they just tell him lies

But there's a woman on my block
Sitting there in a cold chill
She say who gonna take away his license to kill?

Ya may be a noisemaker, spirit maker
Heartbreaker, backbreaker,
Leave no stone unturned
May be an actor in a plot
That might be all that you got
'Till your error you clearly learn

Now he worships at an altar of a stagnant pool
And when he sees his reflection, he's fulfilled
Oh, man is opposed to fair play
He wants it all and he wants it his way

Now, there's a woman on my block
She just sit there as the night grows still
She say who gonna take away his license to kill?

And then, I woke up this morning to three Psalms in my office of readings.  Pretty much the groundwork for the song above. 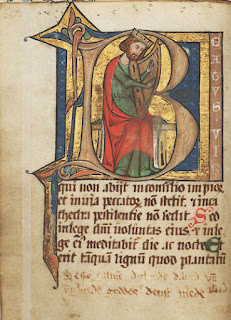 The Lord will protect the rights of the oppressed.

Lord, why do you stand afar off
and hide yourself in times of distress?
The poor man is devoured by the pride of the wicked:
he is caught in the schemes that others have made.

For the wicked man boasts of his heart’s desires;
the covetous blasphemes and spurns the Lord.
In his pride the wicked says: ‘He will not punish.
There is no God.’ Such are his thoughts.

His path is ever untroubled;
your judgement is far from his mind.
His enemies he regards with contempt.
He thinks: ‘Never shall I falter:
misfortune shall never be my lot.’

His mouth is full of cursing, guile, oppression,
mischief and deceit under his tongue.
He lies in wait among the reeds;
the innocent he murders in secret.

He crouches, preparing to spring,
and the helpless fall beneath his strength.
He thinks in his heart: ‘God forgets,
he hides his face, he does not see.’

The Lord will protect the rights of the oppressed.

Lord, you have seen our trouble and our sorrow.

Arise then, Lord, lift up your hand!
O God, do not forget the poor!
Why should the wicked spurn the Lord
and think in his heart: ‘He will not punish’?

But you have seen the trouble and sorrow,
you note it, you take it in hand.
The helpless trusts himself to you;
for you are the helper of the orphan.

Break the power of the wicked and the sinner!
Punish his wickedness till nothing remains!
The Lord is king for ever and ever.
The heathen shall perish from the land he rules.

Lord, you hear the prayer of the poor;
you strengthen their hearts; you turn your ear
to protect the rights of the orphan and oppressed:
so that mortal man may strike terror no more.

Lord, you have seen our trouble and our sorrow.

“The Father deigned to send his Son for the sake of us, the poor” (St Augustine).

The words of the Lord are words without alloy, silver from the furnace, seven times refined.

Help, O Lord, for good men have vanished;
truth has gone from the sons of men.
Falsehood they speak one to another,
with lying lips, with a false heart.

May the Lord destroy all lying lips,
the tongue that speaks high-sounding words,
those who say: ‘Our tongue is our strength;
our lips are our own, who is our master?’

‘For the poor who are oppressed and the needy who groan
I myself will arise,’ says the Lord,
‘I will grant them the salvation for which they thirst.’

The words of the Lord are words without alloy,
silver from the furnace, seven times refined.

It is you, O Lord, who will take us in your care
and protect us for ever from this generation.
See how the wicked prowl on every side,
while the worthless are prized highly by the sons of men.

The words of the Lord are words without alloy, silver from the furnace, seven times refined.

Psalm-prayer
Your light is true light, Lord, and your truth shines like the day. Direct us to salvation through your life-giving words. May we be saved by always embracing your word.

℣. The Lord guides his humble in the right path.
℟. He teaches his way to the poor.

Our heavenly Father knows… he knows and loves us anyway and wants to bring healing to us, if we were but willing.

Alas, too often I am not willing to surrender to his infinite loving care.  Too often I don’t even trust that He is good.  Too often I have believed the lies of the enemy that tell me God the Father cannot be trusted.

But then there is hope in my heart, for today at Mass I saw some people who do trust in His goodness.  It brought tears of joy to my eyes.

And not just at Mass.  I look at my beloved Margie and her self-sacrificing outpouring of love for her staff, clients and our children.  I listen to her and my children grapple with the current events, groping and struggling to respond with courage and love… and you know what?… that both displays and fills me with hope.

Love wins in the end.  (I cheated and read the end of the book ;D) 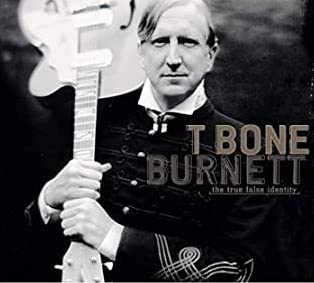 I’ll end with lyric from another prophet, T-bone Burnett:

Remember, all produce on the farm is freely given
and never for sale. All donations to the farm
are tax deductible as we are a registered 501(c)(3).
If you've been blessed by our produce and would
love to make sure others get blessed too,
use the 'Donate' button below to pay it forward.
Posted by Farmer Fred at June 02, 2020